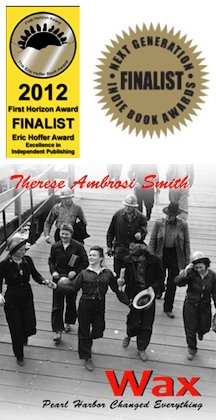 Proceeds from the sale of print books through this website, or from the Rosie the Riveter/ WWII Home Front National Historical Park visitors’ center store will support the creation of a traveling exhibit that articulates home front history.

I can’t remember when I first learned about Rosie the Riveter. She’s always been there, like the national anthem and baseball. So I was surprised when my thirteen-year-old friend Lara told me she thought the iconic poster from the forties was an ad for power tools.

It was a Saturday morning in early October, and Lara came by as I was pulling a piece of spongy wood trim off the back window of my beach shack. “Just trying to stay ahead of decay,” I said, and asked if she wanted to help.

She picked up my cordless drill and posed with flexed bicep. “We can do it,” she said.“You’re a Rosie fan,” I said.

Lara shrugged. “I saw it on your dishtowels,” she said.

The women who built the steady stream of replacement warships and aircraft deployed in WWII were Roosevelt’s secret army, and Hitler gravely underestimated them. Like their soldier brothers, they too left ordinary lives to do extraordinary things. They worked in difficult and dangerous conditions, often at the limits of their physical ability. They accomplished tasks they had never imagined having the strength or training to do. They were the home half of the greatest generation.

They helped save the world.

October 25, 1941
It was Katherine Hepburn who’d convinced Tilly she could play an important role in the drama unfolding on the world stage. The Maltese Falcon had come to Half Moon Bay. Tilly was so excited, she took the bus to town ahead of Mark, because she thought he’d be late and she didn’t want to miss a minute. The lights were down before he slid into the seat beside her. He’d waited in line ten minutes for a fresh batch of popcorn and had bought the largest size—because she loved it—but when he passed her the bag, she barely acknowledged him. Her eyes were glued to the newsreel.
All Tilly could see at first was a person covered head to toe in canvas and gear, in overalls and a welder’s mask and those big heavy gloves, holding the rod in one hand and a torch in the other. She couldn’t tell it was a woman. And then Katherine Hepburn took off the mask and looked straight into the camera—straight at Tilly—and said “Democracy’s in a jam.” Tilly was eating popcorn by the handful, rapt, not even blinking, shoveling through the bag while Mark sat quietly beside her.
The feature film followed, but Tilly, who’d seen the future, couldn’t concentrate on the exploits of Sam Spade. She was ready to take her place with women in industry. Tilly Bettencourt would leave home and work to supply the Arsenal of Democracy.
In twenty years, Tilly had never been farther north than San Francisco or farther east than San Mateo. She worked for tips and could predict, with accuracy, how much each of the regulars would give before she’d even served them. She was pretty sure everyone in town believed they knew how her life would unfold. Mark was a boyfriend who would do in a pinch, but he wasn’t someone she dreamed about. She needed to get out, breathe. She needed to be part of something bigger, and what better cause was there?