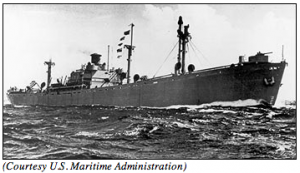 This information comes courtesy of the National Park System.

Twenty years after the end of World War I, America’s merchant fleet, including its cargo and passenger ships, faced obsolescence. In 1936, the Merchant Marine Act of 1936 authorized a shipbuilding program; World War II provided the impetus to intensify production. By the end of the war, the ship-building program produced 5,500 vessels including 2,710 mass produced Liberty ships. Women in the 1940s built Liberty ships at the Kaiser shipyards in Richmond, CA.

While reviewing blueprints of the Liberty ships at the White House, President Franklin D. Roosevelt, who loved naval architecture and had an eye for design, mused aloud, to Admiral Emory S. Land, “I think this ship will do us very well. She’ll carry a good load. She isn’t much to look at, though, is she? A real ugly duckling.” The Liberty ships received their nickname, “the ugly ducklings”.

The United States entered World War II with the beginnings of a great merchant fleet, but lethal U-Boats — submarines of the German Navy — prowled the shipping lanes hunting American merchant ships. Liberty ships were too slow and too small, and in 1943, the United States launched a new ship-building program. The new vessels, called Victory Ships, would be faster, larger and able to carry cargo long after the war was finished.

Their new home, the shipyard, was to Sylvia a colossal industrialized hive, highly organized, with all energy flowing to a single purpose for three shifts, everyday. Her regular schedule was Saturday through Thursday, with potential overtime. Tilly’s schedule was identical. Doris worked swing, but often stayed on into the night shift. Their collective mission: To restore the fleet—replace vessels destroyed by German U-Boats. As Sylvia labored coating decks with a non-skid surface, she tried to forget why so many ships were needed. “Each of these boats can carry the population of a small town outside of Kansas City,” she wrote home to her sister. Always in her mind were Robbie and the boys he served with.
. . .
With the bracing around the completed hull removed, the air horn sounded, and workers left their tools to watch. Towing commenced. As the vessel slid from the marine way, Sylvia and Tilly saw it come alive. It was a real Liberty ship. They cheered and hugged as it was moved to the outfitting dock where a technical crew, including Doris, would install operating equipment in final preparation for the sea trial. Tilly was giddy.
“It’s always exciting,” a woman next to Sylvia said. “It just doesn’t get old.”
At the end of shift, Tilly picked up her first real paycheck; she’d need to open a bank account. Payday at the roadhouse had been an informal affair—Jose would simply open the register and count out the bills. She explained this to Sylvia as they walked downtown. As she scrutinized the pay stub, she stopped abruptly. “There must be some mistake,” Tilly said.
Sylvia looked over her shoulder, “What seems to be the problem?”
Tilly explained that they had deducted the correct amount for war bonds, but there were other deductions she didn’t understand.
Sylvia laughed at her and explained how income taxes worked. “About four percent,” she said. “They need money to build all these boats.”
When hull #1553 was christened the Mary Cassatt, Tilly, Doris and Sylvia toasted with mugs of rationed coffee and vowed to have a proper celebration when they had a night off together. They had all worked on the vessel, and it was completed, from keel to christening, in forty-four days. Sylvia, holding a brush and posing in her splattered overalls, pointed out that their first common vessel was named for a woman painter.
“Next thing we know,” Tilly said, “you’ll want one christened the Sylvia Manning.”