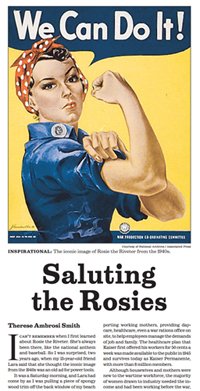 I was thrilled that they ran this today — to honor veterans of the WWII home front. Click on the image to the left to read the whole article as it appeared.

Some news from “Wax”:

March 3, 1945
Doris said it looked like they were winning the war. She read aloud from the front page of the San Francisco Chronicle while Tilly made coffee. She read the papers religiously, following the allies’ progress. Troops were crossing Belgium and Luxembourg to enter German territory. She stretched back in the settee.
The smell of brewing mud reminded Tilly of home, and lately she was thinking more about where she would go after the war. Her family expected her to return. “Production’s slowing,” she said during a lull in the late spring rains that had made casual conversation, in the aluminum Airstream, impossible. She looked out the window at an asphalt parking lot littered with trailers. Some had potted tomato plants in front: miniature victory gardens. They too, reminded her of home.
“It says here that the country is nearly bankrupt,” Doris said. “The war will have to end soon.”
Tilly poured the first cup and passed it to Doris. Then she passed the cream. “The first week, I didn’t think I’d ever get used to this life,” she said, “but here I’m useful in some important way.”
“I can’t go back to selling lipstick at Gimbels.” Doris said. She turned back to her newspaper and Tilly made herself a peanut butter sandwich.
Tilly heard Sylvia whistling outside, and Doris reached across the upholstered bench seat, worn by years of continuous use, to unlatch the door. Sylvia always seemed to know when their coffee was ready. She had her favorite mug in hand.
“Can you believe it?” Sylvia said. “We all have a night off. We’re never off at the same time.”
Tilly couldn’t understand why she was so excited. She didn’t want anything to change. “Production’s slowing,“ she said.
Doris looked up, “We know.”
Tilly suspected that when the layoffs came, Doris would have the most difficult time adjusting, even though she was closest to total exhaustion. She’d made the most of the opportunity, but it didn’t matter how good she was. They understood that returning soldiers would be hired to do their work.
Sylvia slid in beside her on the settee. Years as a painter had done little to reduce the spread of her hips, and the Airstream was suddenly crowded, but Tilly didn’t move away. They sat elbow to elbow.
“We’ve never properly celebrated the Mary Cassatt,” Sylvia said.
“Wasn’t she sunk?” Doris said. She filled Sylvia’s mug.
“She was lent to the Russians,” Sylvia said. “But it doesn’t matter. We built her, and she was launched in forty-four days.”
Tilly and Doris looked at her. Tilly took another bite of her sandwich and said, “I don’t know how you keep track of all our hulls.”
Sylvia snorted and put her cup down abruptly, “What do you think I keep in that little metal box? Recipes?”
“You’re serious?” Doris said. “You have a card for each hull?”
“Of course,” Sylvia said. “I’m keeping track, and we’re winning. We’ve out-produced them. It’s time to celebrate.”

My Uncle Joe inspired this page. He shares clippings from Pittsburgh newspapers about women in the 1940s. 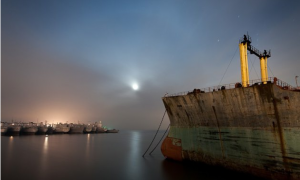 Check out this slide show for views of the mothball fleet! 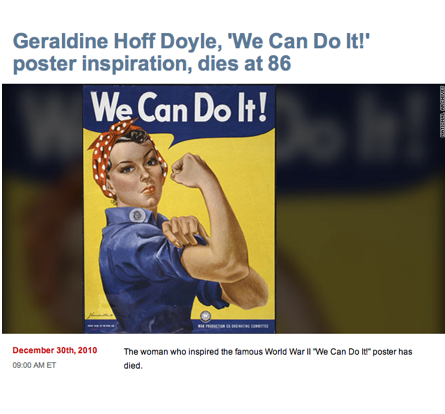 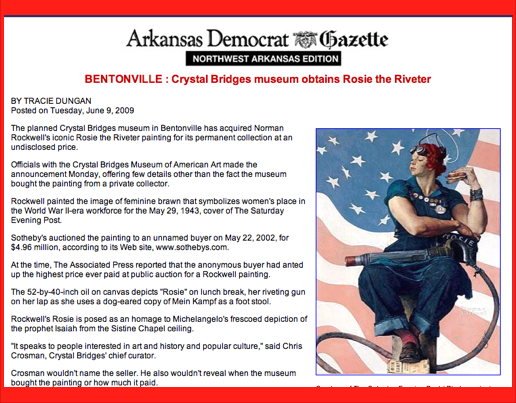